Watch our Grand Finale Concert for the 2021 Season 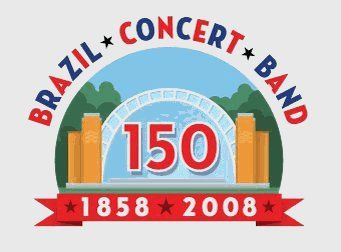 We are currently on winter hiatus. Check back often to follow our musical journeys. See you in the Spring for our 2022 Concert Season.

Enjoy our Veterans' Day Concert below.

Our music director is Matt Huber, who has directed the Brazil Concert Band since 1982. Matt began playing trombone in the BCB in 1968 and received his 50-year plaque for service to the BCB in 2018. Matt is also the music director of the Jackson Township Community Band. In 1990, Matt received the Clay County Focus Award for his volunteer

Our music director is Matt Huber, who has directed the Brazil Concert Band since 1982. Matt began playing trombone in the BCB in 1968 and received his 50-year plaque for service to the BCB in 2018. Matt is also the music director of the Jackson Township Community Band. In 1990, Matt received the Clay County Focus Award for his volunteer service to the BCB. In 2016, he was made a Paul Harris Fellow by the Brazil Rotary Club and in 2006, Matt was commissioned a Kentucky Colonel. Matt graduated from Brazil High School in 1971, holds a BS in Elementary Education from Indiana State University, 1975, and a MS in Elementary Education from ISU,1978. Matt is a member of the Indiana Bandmasters Association. Matt is retired from Greencastle Community Schools where he taught 6th grade for 33 years. Matt is happily married to Melanie, secretary/treasurer BCB/JTCB, and has two children, John Philip, euphonium Brazil Concert Band/Jackson Township Community Band and Janelle Renee, flute/piccolo Brazil Concert Band/Grand Forks, ND City Band.

Our euphonium section leader is John Huber. John began playing percussion with the Jackson Township Community Band at age 5. John has been playing with the Brazil Concert Band since age 10. He began playing with the percussion section and then joined the euphonium section at age 14. John also plays euphonium with the Indiana Wind Symphony and the Indianapolis Brass Choir. John is a member of the Indiana Bandmasters Association. John holds a BA in Music from Indiana State University, 2010, a MA in Euphonium Performance from the Royal Welsh College of Music and Drama, Cardiff, Wales, and a PGDip from the Royal Northern College of Music in Manchester, England. John has taught music at Ivy Tech Community College, Saint Mary of the Woods College, Rockville and Turkey Run Schools.

Come join The Brazil Concert Band for the 2022 Season!

The music folder melts away the age barrier. People of all walks of life belong to the BCB, encompassing an entire community of professions. Teachers, preachers, bankers, construction workers, business people, military, medical, lawyers, retired people, high school and college students all grace the stage. Membership is about 50-50 men and women. Essential skills include sight-reading abilities and commitment to the Tuesday evening rehearsals 7:00 p.m. and Sunday 8:00 p.m. concerts all at Forest Park in Brazil, Indiana. Our season extends from the first Sunday in June through the last or next to the last Sunday in August each year. Self-ownership of an instrument is required. Must be a freshman in high school or older to become a member. Learn more by emailing us below.

The Brazil Concert Band dates to 1858, making it one of the oldest continuous concert bands in Indiana. Earlier known as the “Brazil Cornet Band”, the band played for the Lincoln-Douglas debates, and many members served together as musicians during the Civil War.

The band has received special national commendations from the U.S. Marine Band and Former Vice President Dan Quayle. The Indiana General Assembly issued a resolution in its honor due to the efforts of Former Rep. Susan Crosby. Director Matt Huber received a Clay County Focus Award for his work with the band. Many musical pieces have been written for the band in recent years. Composer Steven Kent Goodman wrote the march “The Pride of Brazil” and Putnam County composer Malinda Zenor wrote "The Forest Park Brigade", both in honor of the Brazil Concert Band. Composer Francis Massinon, professor emeritus in French Horn, Austin Peay State University, has written six marches for our band, including “The Huber Express” while Composer John Camp wrote three marches for the Brazil Concert Band during the 2021 concert season. In 2006, the band was presented with the Sudler Silver Scroll Historic Community Band Award by the prestigious John Philip Sousa Foundation.

The Music Director is Matthew S. Huber, who has led the BCB since 1982 and has been a member since 1968. Matt received his 50 year plaque for his service to the BCB in 2018. In 2016, he was made a Paul Harris Fellow by the Brazil Rotary Club and in 2006 was commissioned a Kentucky Colonel.

Each season, the BCB performs a series of 13 Sunday night concerts drawing crowds of up to 2500 fans at its home, the Forest Park Bandshell, built for the BCB in 1937. The Bandshell was remodeled and enlarged in 1994 through donations by the patrons, the Clay Community Parks Association, and the Brazil Park Board.

The BCB boasts a music library of over 1,500 selections, of which about 200 are played each season. New band literature has been donated and purchased thanks to the Zorah Shrine, Fred Jewell, Jr., and friends of the BCB.

In 2003, The Brazil Concert Band recorded its first CD “Jewell of the Wabash” that included 20 marches by the Indiana March King Fred Jewell. In 2007, the band once again recorded 20 more Fred Jewell compositions with the CD “Brazil Special” including marches, overtures, serenades, and waltzes. Fred Jewell Sr. played in the BCB in the early 1900s while his son Fred Jewell Jr. played with us in the late 1980s through the early 2000s. The BCB and the Jackson Township Community Bands inherited the stock music of the Fred Jewell Music Company in the early 2000s.

In 2019, the BCB received the Brazil Rotary Grant of $6000.00 that allowed our band to purchase a new set of tympani.

Among the goals of the Brazil Concert Band are to preserve and perform the works of John Philip Sousa, Fred Jewell, Karl King and Henry Fillmore. It is the mission of the BCB to continue this American tradition as set by Sousa and others. Another goal is to provide a musical outlet for the adult musician, both amateur and professional. Equally important is to serve city, county, state and nation through the sound of music.

We perform every Sunday evening at 8:00 p.m., rain or shine, in Forest Park on the south side of Brazil, Indiana in June, July, and August each year.  During rain, the band plays in the Forest Park Pavilion.